Originally conceived in 1986 for manufacturing, process automation, large assembly, and material handling applications, PROFIBUS (for Process Fieldbus) is an OSI-compliant, open fieldbus-based automation standard. Like other fieldbus protocols, such as Modbus, HART, or ControlNet, PROFIBUS is standardized under IEC 61158, vendor-independent, and specifically designed to facilitate communication between controllers and field devices in industrial environments. It is nearly universal throughout Europe but also extensively implemented in North America, South America, Africa, and Asia. In fact, there are over 50 million PROFIBUS devices deployed in industrial automation applications worldwide.1

Why Was PROFIBUS Developed?

Prior to the implementation of digital fieldbus technology, the first analog, 4-20mA electronic controls were introduced into industrial and manufacturing facilities in the 1950s. An advancement over manual controls, the new electronic controls were affordable and reliable, but they also had significant disadvantages: An analog 4-20mA system required extensive wiring, troubleshooting was difficult due to the lack of diagnostic information, and the system was prone to unwanted noise interference. In addition, maintaining the extensive wiring infrastructure was complex and costly.

Therefore, in the 1980s and 1990s, several technical groups came together to develop the first fieldbus industrial protocols, including PROFIBUS, which enabled two-way digital communication. By using a fieldbus, multiple field devices could be connected to a controller using a single cable (or “bus”). In this configuration, a PLC’s I/O modules are distributed throughout a facility to collect signals from field devices, such as sensors or actuators. The data from these devices is sent over a single cable to the PLC, reducing costs and improving performance.

There are several variations of PROFIBUS protocol, but two, primary versions of PROFIBUS are widely adopted in process industries: PROFIBUS DP and PROFIBUS PA. PROFIBUS DP (for Decentralized Peripherals) is the more common protocol and is widely used in factory and process automation applications. PROFIBUS PA (for Process Automation) is often implemented as an alternative to 4-20mA current loop communications and is frequently specified in hazardous areas because it prevents explosive conditions by limiting the power delivered to field devices. Some process and automation networks simultaneously use PROFIBUS DP and PROFIBUS PA by deploying a coupler device that allows both protocol variants to operate as part of a single network.

As with many other industrial protocols, devices on a PROFIBUS network are divided into two categories: Master and Slave. Master devices (sometimes designated as “Active Stations”) include PLCs which can send unsolicited requests to other devices on the network. Slave devices (or “Passive Stations”) are transmitters, meters, sensors, actuators, or other field devices which can only send data to a master device upon request.

PROFIBUS DP protocol facilitates communication between the PLC (master) located in the control room and the passive, field devices (slaves) on the factory floor. The PLC is responsible for controlling factory processes and it uses the data from the field devices to continuously monitor operations. However, in large facilities, the long distance between a control room and the factory floor can present a networking challenge. This is where PROFIBUS offers distinct advantages over analog 4-20mA systems that require all the field devices to be directly connected to the PLC, resulting numerous costly cable runs and increasing overhead expenses.

Transmitting data over a single bus reduces material costs as well as engineering, installation, commissioning, and maintenance times. In addition, digital signals can transmit more information than analog signals, improving network diagnostic capabilities and providing real-time performance data in automation environments. Further, digital fieldbus technology is more resilient against electrical noise and a variety of network topologies, such as star or tree, can be easily implemented to accommodate a range of operational objectives.

Devices on a PROFIBUS network are required to have a unique address between 1 and 127. Up to 32 devices can connect to a single network, however the network size can increase to 127 devices with the use of repeaters.

PROFIBUS remains widely used because it is vendor-independent and supports intercommunication between a variety of devices supplied from different manufacturers without additional configuration. This means that it is easy to implement in any automation environment, regardless of the specific equipment used. With relatively low cost and stable, reliable, real-time communications in automatic control systems, it is easy to see why PROFIBUS continues to be a dominant protocol in industrial applications. 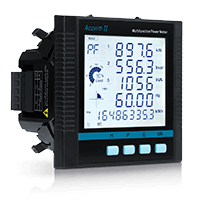 With built-in DNP 3.0 support and advanced, revenue grade energy and power measurements, the Acuvim II is ready for deployment in electric utility and other SCADA applications. Depend on seamless interoperability and proven energy data transmission in critical environments.