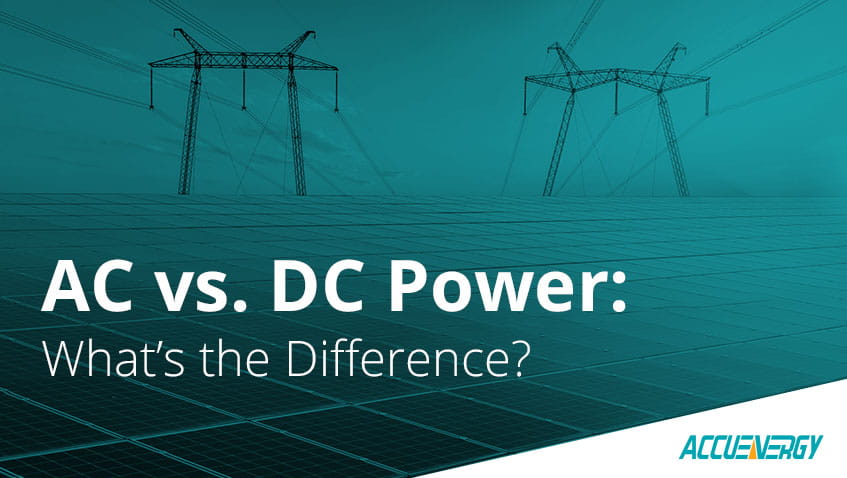 Direct current (DC) and Alternating current (AC) are common, elemental terms when learning about electrical systems or electronics, but what exactly do they mean? And which one is better?

Both DC and AC describe the flow of charged particles, called electrons, through a wire and the most fundamental difference between the two is the direction in which the electrons flow.

As the name suggests, the electrons in a DC system flow in a single direction at a steady rate. In fact, if you were to graph DC power over time, it would appear to be a straight line from left to right without any fluctuation. Because the voltage remains constant over time, the frequency of DC current is zero. Direct current is generated from batteries, solar panels, or specialized DC power supplies and is used by electronics of all kinds.

In contrast, the electrons in an AC power system behave in a very different manner. Instead of a constant flow from negative pole to a positive pole, the electrons in an AC system flow back and forth or oscillate. When this is graphed for an ideal system, it appears as a sinusoidal wave where the magnitude fluctuates over time between positive and negative. The frequency of AC electricity, or “cycles” per second, depends on where in the world you are located. In the United States, the frequency is 60Hz (60 cycles per second), however most countries use 50Hz (50 cycles per second) as their AC frequency. A typical wall outlet provides AC power and can be used directly by lamps, small appliances, or other devices that do not have electronic components.

When comparing AC vs DC power, it’s not possible to declare one better than the other because both are used throughout homes, businesses, and industries every day. However, there are specific uses where each one has a clear advantage.

When it comes to delivering power over long distances—think power transmission between a power plant and an electrical substation—AC power is clearly the best choice. To efficiently transmit power over long distances, the voltage level needs to be very high, usually in the range of hundreds of thousands of volts, so that a large amount of power can be transmitted at a lower current so that less power is lost during transmission. The voltage is “stepped up” by using transformers for transmission and then “stepped down” when it reaches a local power substation so that it can be distributed to neighboring homes, businesses, or other customers.

From computers to cell phones to television, it would be nearly impossible to get through the day without any number of electronics. One thing they all have in common is their reliance on DC power. The integrated circuitry in each device, comprised of transistors and other components, requires DC voltage to operate. In fact, AC current could easily damage the sensitive components which need constant, steady current.

But if wall outlets provide AC power, how are electronics getting the type of power they need? The answer is that these electronic devices include a power adapter, or power supply, that coverts the AC current to DC. For example, a laptop computer will include a power adapter in between the wall plug and computer that contains a component known as a rectifier for converting AC power into usable DC power. Power adapters can also adjust the voltage to the correct level for the specific device.

All batteries use DC power so it’s easy to understand why batteries and electronics go hand in hand. In fact, AC power cannot be stored in batteries or via any other method. Every battery has a positive and negative terminal between which the power flows between at a constant rate. Since electronics rely on DC power, batteries are the ideal power delivery method and have the added advantage of being portable, an essential feature of many electronics.