A primary advantage to RSTP networks is that they offer high availability when compared to traditional daisy chain topology. When a network failure does occur, devices are able to continue communicating across the network as data can be rerouted around the failure. Critical systems depend on a high level of resiliency to faults and hardware failures and RSTP provides a key improvement over traditional network architectures by minimizing downtime.

RSTP prevents network loops when using multiple switches by blocking redundant paths on a network. In essence, the protocol is a set of rules by which switches on the network determine the most efficient way to send broadcasts across the network by establishing a “root bridge” and blocking specific ports with the purpose of preventing network loops.

Let’s look at why network loops are undesirable. There are three primary reasons why it is important to have a “loop free” Ethernet network, briefly explained here.

When a switch receives a broadcast, but does not know the MAC address of the destination, it will send the broadcast out every port. This can create a situation where a device will receive duplicate copies of each broadcast being sent, wasting valuable bandwidth on redundant data. It can also lead to unrecoverable data errors.

Perhaps the most important reason to avoid loops in network topography is to prevent “broadcast storms.” A broadcast storm is created when switches in the network each send out multiple, duplicate copies of data (or “broadcast packets”) across the network. When switches are connected in a loop, data can travel to a switch from multiple paths. Because the MAC address table is unstable in a loop arrangement, a switch has no way to understand where data needs to be sent so it broadcasts the information out of every port. This data is received by all switches on the network, and rebroadcast out again because the recipient is still unknown. This can overwhelm switches and severely degrade network performance. The broadcast storm will continue until one of the switches fails or is disconnected from the system. 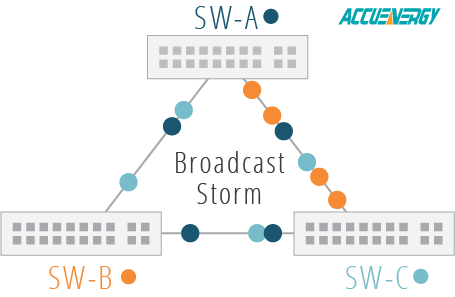 RSTP, along with its predecessor STP, was developed for the purpose of preventing detrimental loops within a network.

RSTP prevents network loops by blocking redundant ports. A blocked port will still receive data, but will not send that data out to other devices on the network. This ensures that switches will receive only a single copy of a packet. If any of the active paths fail, one of the blocked ports will be used. The port that is selected depends on the topology of the configuration.

RSTP is an improvement over STP (Spanning Tree Protocol) mainly due to its reduction in convergence time – that is, the time it takes all switches on a network to reach a state of convergence, or agreement, on the topology of the network. In STP, there is substantial convergence time whenever there is a topology change or failure in the network, which typically lasts for 40-50 seconds. In a modern, high-demand networking environment, there is a constant need for increased speed and reliability and a delay of 40-50 seconds is generally unacceptable. RSTP reduces the convergence time significantly down to around 5-10 seconds.

Fortunately, many modern switches on the market automatically enable RSTP by default. Further, for networking environments with a mix of older and newer equipment, it is important to note that RSTP is backward compatible with the older STP standard.


How does RSTP work?

RSTP is a set of rules by which switches on the network determine the best way to route data on the network without redundancy. When it is enabled on a network, an algorithm determines the configuration of the spanning tree automatically.

The root bridge in the RSTP/STP is the bridge at the top of the spanning tree and is responsible for sending network topology information to other switches on the network. This is important for instances when there are hardware failures or other topology changes so that efficient, alternate paths are established with minimal delay.

RSTP can be described by three port states: Discarding, Learning, and Forwarding. The Disabled, Blocking, and Listening states described by STP have been combined into the Discarding state in RSTP. The functionality is similar.

Network configuration is outside the scope of this document. To determine whether your network has RSTP or STP enabled, contact your system administrator or consult your network hardware documentation.

The AXM-WEB2 is an Ethernet communications module for the Acuvim II Series Meters which supports RSTP. This allows users to daisy chain multiple WEB2 modules together. There can be a maximum of 32 modules daisy chained together via Ethernet. RSTP can be enabled from the module’s web interface under the Network tab in the Communication Settings page. When RSTP is enabled in the module, an Ethernet bridge is created between Ethernet ports 1 and 2. 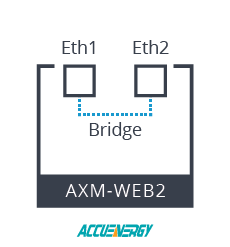 When this bridge is created, it allows the Ethernet ports 1 and 2 to send and receive data. 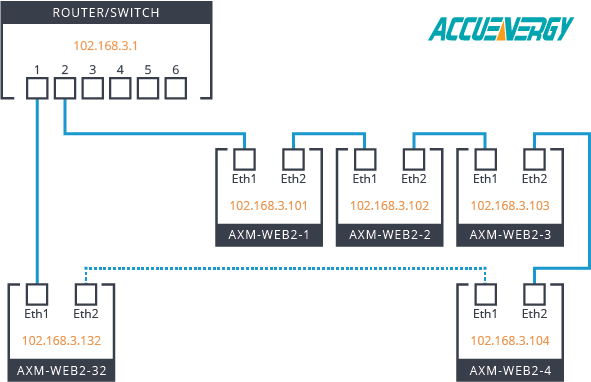 For a simple example of how RSTP works with the AXM-WEB2, we will use two modules. The example network diagram below shows an Ethernet network consisting of one router and two AXM-WEB2 modules. 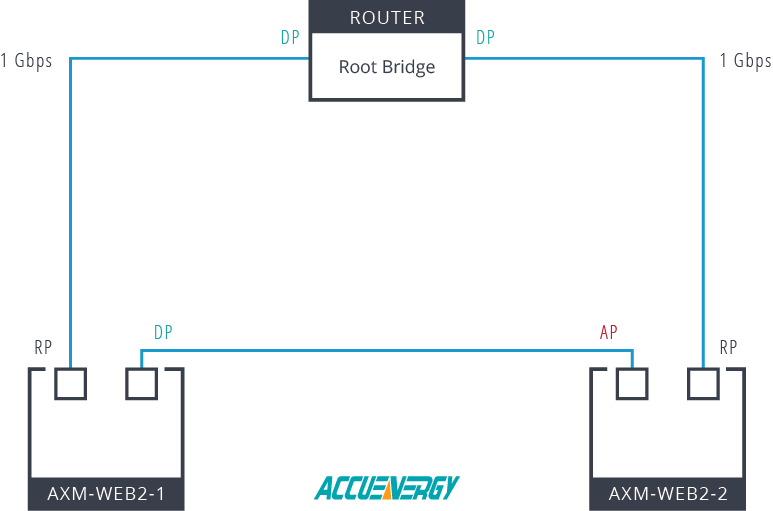 Enabling RSTP results in increased network speed and reliability without hardware upgrades or changing network architecture. It is a simple, cost-effective way to maximize efficiency on existing networks. Users with the AXM-WEB2 module with firmware 1.08 and above can take advantage of the RSTP feature.